Physics : How to prepare for IAS mains?

I have secured 378 (208 + 170) in Physics in CSE 2007. I had 269 in CSE 2006. The improvement was primarily due to emphasis I gave to answer writing practice during the attempt. I practiced (and memorised) most of the questions asked in past 15 years and prepared relevant notes.

Notes are a must for this optional. Best way is to read a topic, solve past years papers and improve the answers to the best of your ability. The answers form your notes. Go through this process religiously. It will help because the paper does not give time to think. Only rigorous practice can help in writing answers well in the time alloted.

With some exceptions, most topics require more than one book. Pick up a standard text book for the topic (I'll mention mine topic wise below) and study the parts mentioned in syllabus thoroughly from it. For books for other topics follow borrow, beg, steal, buy policy in the correct order.

Quantum Mechanics: Textbook Ghatak. It's a tough book but I am happy about my choice. Atleast it does not give wrong concepts, only tough concepts. Covers most topics well. But here's what's not in it.

Proof that Gaussian wavepacket is minimum wave packet: It is given in unsolved with hint but does not solve the equation. Be brave, go ahead and solve the differential equation. Do normalise the final result.

Ehrenfest Theorem: It is in unsolved with hint but in three dimensions using del operator. Solve it in one dimension using integration by parts. Or see solution from Satya Prakash.

Finite well: It solves the problem but it's much better in H C Verma Quantum Mechanics. Please read H C Verma for this.

Linear Harmonic Oscillator: Follow the book and reach till Hermite polynomials. The only problem is it's quite lengthy. So delete the part where the author proves that s = 1 is invalid. Start with assuming s =0 i.e. remove s from the picture altogether. Not correct according to rigorous mathematics, but we are talking Physics. This topic will require lots of practice to finish in the time alloted.

Hydrogen atom Problem is a head ache, but there is no shortcut. If a question is asked in examination, read it thoroughly and see whether it demands a complete solution or not.

Do operator algebra and Pauli spin matrices from Satya Prakash. It's a must

Atomic and Molecular Physics: Raj Kumar for Atomic Physics and Banwell for Molecular Physics are a must and good enough. Stick to the syllabus. The topic missing is "Importance of neutral .......". The only question asked till date is H21 cm line. Prepare answer on it from internet.

Patel is a good source for most topics. I particularly like the way it deals with Liquid Drop model. However, it is not as conceptually correct as I would like it to be.


Semi empirical mass formula and mass parabolas, deutron problem and non-central forces are done well in Patel. While discussing mass parabolas be sure to mention all the four cases with examples.

Shell model should be done from Resnick-Eisberg (It is a good reference book for entire Paper II). Do the need for the model, assumptions, results, physical interpretation, successes and failures – done well in Eisberg and somewhat in Patel.

Violation of parity in beta decay is done extremely well in Irving Kaplan. A must read for this topic.

Mossbauer spectroscopy is in Chapter 9 of Patel. But it does not give good applications (especially regarding application in general relativity). Do some of the applications from Eisberg. See question asked in Indian Forest Service Examination 2007.

Nuclear fission is done well in Eisberg. Eisberg is also a must for nuclear fusion, role of quantum mechanics (barrier penetration) and energy production in stars.

B S Aggarwal deals ok with critical mass required in nuclear reactors. Four factor formula is done well in Patel. But no book goes into detail of types of nuclear reactors. All just give an overview. Be happy with it.

For Elementary Particles do the Chapter in Pandya Yadav. Physics of neutrinos is done in Patel. Unification of forces is from Beiser. Eisberg may also be referred to but at a later stage.

Space groups are just given a passing reference in Pillai. It is a very tough topic and details may be omitted. Details of Point Groups are available on internet. Curious Aspirants may go through 32 point groups from internet.

I don’t know about electron microscopies.

In Band theory, Pillai does not give proof for Bloch Theorem. That may be done from C L Arora. Omit the solution of determinant in Kronig Penney model and just give the final equation obtained after solution followed by the interpretation as given in Pillai.


Mechanics: The syllabus has changed quite significantly, so keep a look out for better sources. Textbook: J C Upadhyaya

Mechanics of Particles: Upadhyaya does not have topics related to gravitation. Most of the others are covered well. Centre of mass and laboratory reference frames can be done from Kleppner-Kolenkov.

Rigid Bodies: Again, Upadhyaya is quite good. “Top” is covered in it but the treatment is very mathematical. I referred to T W B Kibble to get a good physical understanding of the topic.

Continuous media is a new topic and I don’t know about it.

Relativity is done well in Upadhyaya especially Minkowski, Four vector, covariance. But the book won’t give conceptual clarity. Read Bieser for concepts before starting with Upadhyaya.

Waves is covered well in Bajaj. Stick to the syllabus and see previous years questions to get the orientation. Huygens principle is from Ghatak (Optics).

For Interference, Diffraction and Polarization follow Brijlal Subramaniam. Certain topics which are not in it can be done from Ghatak. Circular aperture is a tough topic, but I did the needed mathematics from Ghatak. Focusing of laser beams is another tough topic but it is given in Ghatak. Don’t go into mathematical details of holography. Just a simple “General Studies” approach.


Electricity and Magnetism: I had studied Field and Wave Electromagnetics by D K Cheng at college and that remained my textbook for the topic. It explains concepts well but it is not a popular book though and neither is it sufficient.

Cheng does not cover multipole expansion which is done adequately in Griffiths (a popular textbook for the topic). Cheng is quite good in solutions to boundary value problems. Magnetic shell is from D C Tayal. Clausius Mossoti equation can be done from textbook in Solid State Physics.


Cheng and Tayal are ok for Current Electricity portion of the syllabus.

Chopra/Aggarwal is a must for Electromagnetic waves. It’s a good book. Concepts are explained well in Cheng also but not in sufficient detail. EM Field Tensor and covariance are from J C Upadhyaya (Classical Mechanics). Rayleigh scattering is dealt well in Chopra/Aggarwal.

Satya Prakash is needed mostly for Otto and Diesel Engines, derivations of statistical distributions (Maxwell-Boltzmann, Fermi-Dirac, Bose-Einstein). Again stick to the syllabus and prepare answers. There will be more than one way to derive many questions. Be thorough with the one you are confident about.

I have uploaded my answers in CSE 2007 Physics exam at the following link. These are not ideal answers but approximately what I wrote in the examination. These answers fetched me 208 and 170 marks in Physics 1 and Physics 2 respectively. I am sorry that the file size is quite large (2.5MB for Physics - 1 and 7.5 MB for Physics-2).

http://www.mediafire.com/?sharekey=ff63438ea2c862ed61d4646c62b381cbe91d609b8861da36c95965eaa7bc68bc
* This articles is taken from http://piedhornbill.blogspot.com/
Career Quest is thankful to Mr. Supreet for this nicely written article. We hope this article will be very helpful in your preparation. We recommend Supreet's blog to our readers.

Thanks for sharing such a wonderful post. Who ever looking for the best coaching for IAS/PCS in Lucknow, then join Prayatna IAS. It is one of the Best IAS PCS coaching in Lucknow. 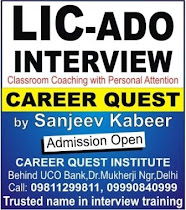